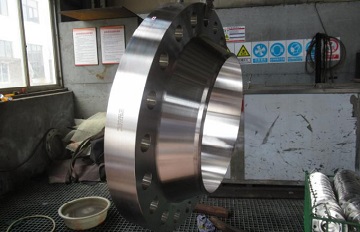 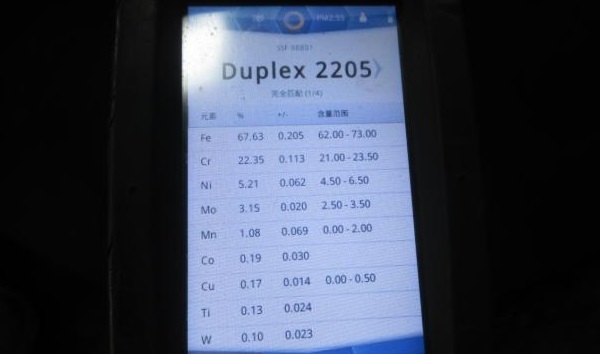 The PMI (spectroscopic analysis) test result for the ASTM A182 Gr. F60 flange.

ASTM A182 Grade F60 is a standard duplex stainless steel forging grade. It has the same nominal composition 22Cr–5Ni–3Mo–N as ASTM A182 Gr. F51 but with narrower actual composition limits. Both Gr. F51 and Gr. F60 of ASTM A182 are called “alloy 2205” or “duplex 2205”, however, the UNS number of the former is S31803 while that of the latter is S32205. The composition range that was originally set for alloy 2205 (S31803) was too broad. Experience has shown that for optimum corrosion resistance and to avoid intermetallic phases, the chromium, molybdenum and nitrogen levels should be kept in the higher half of the ranges for S31803. Therefore, a modified 2205 with a narrower composition range was introduced with the UNS number S32205. 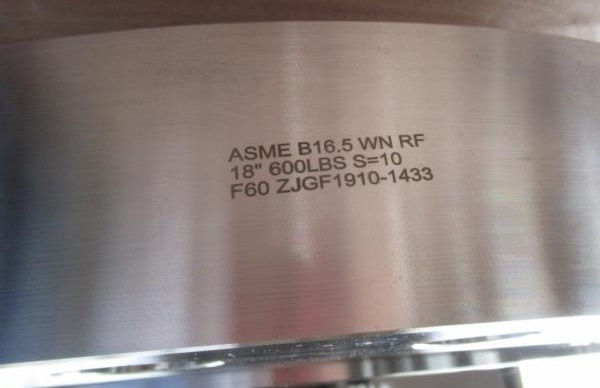 *Composition requirements for ASTM A182 Gr. F60 based on heat analysis.

*Mechanical properties for ASTM A182 Gr. F60 at room temperature.

ASTM A182 F60 flanges shall be made by a hot forging process. The steel shall be forged as close as practicable to the specified shape and size of the flange. The optimum forging temperature shall be controlled between 1100°C [2000°F] and 1150°C [2100°F]. If the forging temperature is higher than 1150°C [2100°F], it may affect the dimensional stability of the work piece and there is increased tendency to form scale above this temperature. If the forging temperature is much lower than 1100°C [2000°F], a considerable amount of detrimental intermetallic phases may develop which can result in cracking in the deformed region. After hot forging, ASTM A182 F60 flanges shall be solution treated at a temperature no less than 1870°F [1020°C]. The flanges shall be soaked at this temperature for a time long enough to dissolve any intermetallic precipitates. After the full solution annealing, a rapid quench shall be followed.

ASTM A182 F60 flanges exhibits excellent resistance to pitting corrosion especially in chloride containing solutions. The primary elements that contribute to the pitting corrosion resistance are chromium (Cr), molybdenum (Mo) and nitrogen (N). An index for comparing the resistance to localized pitting attack is developed in terms of these elements. The index is called pitting resistance equivalent number (PREN). The PREN of ASTM A182 Gr. F60 is defined, in weight percent, using the following equation: PREN = Cr + 3.3Mo + 16N. The higher the PREN, the better the performance of the ASTM A182 F60 flange in chloride environments.