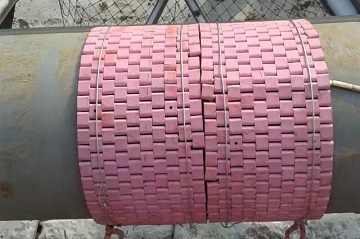 Seamless pipes made of low-alloy steel ASTM A335 Grade P11 can be used for power piping (ASME B31.1) or process piping (ASME B31.3) at elevated temperatures. After joining the two ASTM A335 P11 pipes together by a welding process, postweld heat treatment (PWHT) is required. The PWHT is used to avert or relieve the detrimental effects of high temperature and severe temperature gradients inherent in welding, and to relieve residual stresses created during the operation. The PWHT shall be included in the Welding Procedure Specification, which shall be performed in accordance with the essential variables of ASME BPVC, Section IX.

According to QW/QB – 420 of ASME BPVC Section IX, ASTM A335 Gr. P11 (UNS K11597) is designated with P-number of 4 and Group number of 1. The PWHT zone shall be determined by the criteria that “in all directions from the point of welding fro a distance of the larger of 75 mm or 1.5 times the greater nominal wall thickness“. The PWHT zone shall be heated to a temperature that is between 650°C [1200°F] and 705°C [1300°F] and then held at this temperature range for a time period. The minimum holding time, t (hour), shall be determined by the control thickness of the pipe, T (mm). If the T is no greater than 50 mm, t equals to T/25 with the minimum value of 1/4 hour. If T is greater than 50 mm, t equals to [2 + 0.25 × (T – 50) / 25]. At the construction site, postweld heat treatment on the weld of ASTM A335 P11 pipes is usually performed by an electric-resistance method such as the flexible ceramic pad heater. The rate of heating and cooling during PWHT process shall not exceed 335°C/hour [600°F/hour] divided by one-half the maximum material thickness in inches at the weld, but in no case shall the rate exceed 335°C/h [600°F/h].

After PWHT, the weld of ASTM A335 P11 pipes shall have Brinell hardness no greater than 225, according to ASME B31.3 – 2012. However, in the latest 2018 version, hardness tests are not required except as otherwise specified in the engineering design.