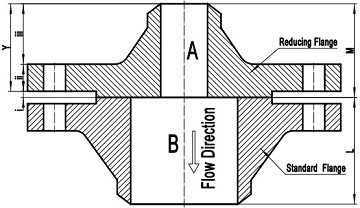 Why Using a Reducing Flange?

Figure-2: two standard welding neck flanges with one reducer to achieve the reduction in piping.

A typical reducing threaded flange without hub made from ASME B16.5 blind flanges.

Reducing flanges shall be designated by the NPS for each opening. Two examples are provided below: