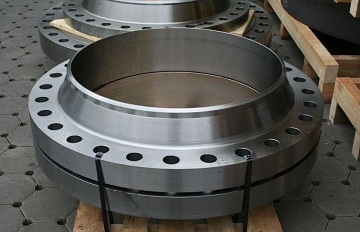 Flanges manufactured in accordance with ASME B16.5 or ASME B16.47 may be made from ASTM A182 grade F321 forgings, which has the nominal composition of 18Cr-10Ni-Ti. ASTM A182 Gr. F321 is a titanium-stabilized austenitic stainless steel, in which titanium is added to avert sensitization to intergranular corrosion when the flange has prolonged exposure to the temperature between 425°C to 815°C [800°F to 1500°C]. The precipitation of chromium carbides at such a temperature results in chromium depletion at the very area adjacent to grain boundaries, which is the cause of intergranular corrosion. ASTM A182 Gr. F321 has a titanium content of not less than five times the carbon plus the nitrogen content and not more than 0.70%. Since titanium carbide is more stable, the carbon content prefers to react with titanium to form titanium carbides before combining with chromium. In such a way, depletion of chromium is eliminated. However, since nitrogen has higher affinity with titanium than carbon, titanium shall be furnished in sufficient amount to cover both the carbon and nitrogen.