GET A QUOTE
 » Technical » General Introduction to Stainless Steels

Stainless steels are iron-base alloys containing at least 10.5% Cr. Few stainless steels contain more than 30% Cr or less than 50% Fe. They form an invisible and adherent chromium-rich oxide surface film. This oxide forms and heals itself in the presence of oxygen. It prevents the further formation of rust in unpolluted atmospheres hence the designation “stainless“. Other elements added to improve particular characteristics include nickel, molybdenum, copper, titanium, aluminum, silicon, niobium, nitrogen, sulfur, and selenium. Carbon is normally present in amounts ranging from less than 0.03% to over 1.0% in different grades. 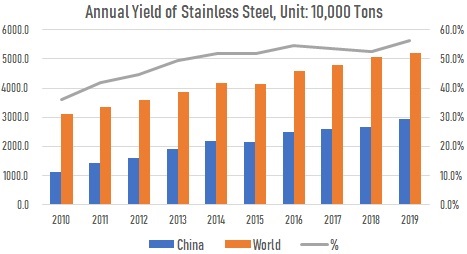 The illustration of annual yields of stainless steels of the world and China, from 2010 to 2019.

The U.S. Steel company spearheaded the successful production of “Stainless W“, a precipitation-hardenable stainless steel, in 1945. Since then, Armco, Allegheny-Ludlum, and Carpenter Technology have developed a series of precipitation-hardenable alloys. The problem of obtaining raw materials has been a real one, particularly in regard to nickel during the 1950s when civil wars raged in Africa and Asia, prime sources of nickel, and Cold War politics played a role because Eastern-bloc nations were also prime sources of the element. This led to the development of a series of alloys (AISI 200 type) in which manganese and nitrogen are partially substituted for nickel. These stainless steels are still produced today. In fact, since the emerging electric vehicle industry nowadays has pushed up nickel price dramatically, there is a spike in demand of the cheaper 200-type stainless steels. 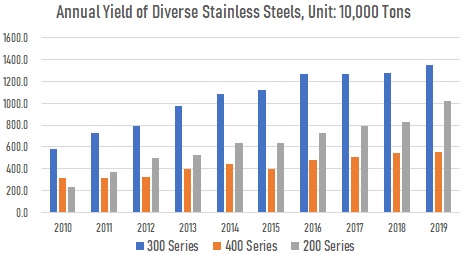 New refining techniques were adopted in the early 1970s that revolutionized stainless steel melting. Most important was the argon-oxygen-decarburization (AOD) process. The AOD and related processes, with different gas injections or partial pressure systems, permitted the ready removal of carbon without substantial loss of chromium to the slag. Furthermore, low carbon contents were readily achieved in 18% Cr alloys when using high-carbon ferrochromium in furnace charges in place of the much more expensive low-carbon ferrochromium. Major alloying elements could also be controlled more precisely, nitrogen became an easily controlled intentional alloying element, and sulfur could be reduced to exceptionally low levels when desired. Oxygen could also be reduced to low levels and, when coupled with low sulfur, resulted in marked improvements in steel cleanliness. During the same period, continuous casting grew in popularity throughout the steel industry, particularly in the stainless steel segment. The incentive for continuous casting was primarily economic. Piping can be confined to the last segment to be cast such that yield improvements of approximately 10% are commonly achieved. Improvements in homogeneity are also attained.

Martensitic stainless steels are essentially alloys of chromium and carbon that possess a distorted body-centered cubic (bcc) crystal structure (martensitic) in the hardened condition. They are ferromagnetic, hardenable by heat treatments, and are generally resistant to corrosion only to relatively mild environments. Chromium content is generally in the range of 10.5 to 18%, and carbon content may exceed 1.2%. The chromium and carbon contents are balanced to ensure a martensitic structure after hardening. Excess carbides may be present to increase wear resistance or to maintain cutting edges, as in the case of knife blades. Elements such as niobium, silicon, tungsten, and vanadium may be added to modify the tempering response after hardening. Small amounts of nickel may be added to improve corrosion resistance in some media and to improve toughness. Sulfur or selenium is added to some grades to improve machinability.

Ferritic stainless steels are essentially chromium containing alloys with bcc crystal structures. Chromium content is usually in the range of 10.5 to 30%. Some grades may contain molybdenum, silicon, aluminum, titanium, and niobium to confer particular characteristics. Sulfur or selenium may be added, as in the case of the austenitic grades, to improve machinability. The ferritic alloys are ferromagnetic. They can have good ductility and formability, but high-temperature strengths are relatively poor compared to the austenitic grades. Toughness may be somewhat limited at low temperatures and in heavy sections.

Austenitic stainless steels have a face-centered cubic (fcc) structure. This structure is attained through the liberal use of austenitizing elements such as nickel, manganese, and nitrogen. These steels are essentially nonmagnetic in the annealed condition and can be hardened only by cold working. They usually possess excellent cryogenic properties and good high-temperature strength. Chromium content generally varies from 16 to 26%; nickel, up to about 35%; and manganese, up to 15%. The 200 series steels contain nitrogen, 4% to 15.5% Mn, and up to 7% Ni. The 300 series contain larger amounts of nickel and up to 2% Mn. Molybdenum, copper, silicon, aluminum, titanium, and niobium may be added to confer certain characteristics such as halide pitting resistance or oxidation resistance. Sulfur or selenium may be added to certain grades to improve machinability.

Over the years, stainless steels have become firmly established as materials for cooking utensils, fasteners cutlery, flatware, decorative architectural hardware, and equipment for use in chemical plants, dairy and food-processing plants, health and sanitation applications, petroleum and petrochemical plants, textile plants, and the pharmaceutical and transportation industries. Some of these applications involve exposure to either elevated or cryogenic temperatures; austenitic stainless steels are well suited to either type of service.