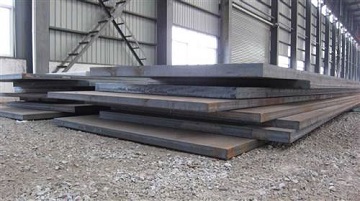 The 1.25Cr-0.5Mo (1.25Cr-0.5Mo-Si) steels can be provided in a variety of product forms in accordance with corresponding ASTM/ ASME standard specifications.

The density of 1.25Cr-0.5Mo steel is 7750 kg/m3, and the Poisson’s ratio is 0.30. The melting temperature range is 2600°F-2800°F. The typical values of thermal expansion (instantaneous, mean, and linear), thermal conductivity, thermal diffusivity, and modulus of elasiticity of the 1.25Cr-0.5Mo steel are listed in tables below. These values are listed as a function of temperature from 20°C to as high as 825°C. 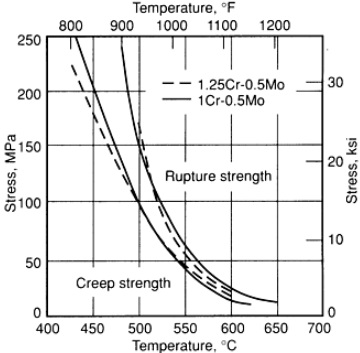 Illustration of creep strengths and rupture strengths of 1.25Cr-0.5Mo steels, compared to that of 1.0Cr-0.5Mo.

Due to the improved creep strength, 1.25Cr-0.5Mo steels can be used at temperatures as high as 649°C [1200°F]. It has comparable stress-rupture and creep properties at elevated temperatures as that of 1.0Cr-0.5Mo alloy steels.

Due to the huge consumption in many elevated-temperature applications, a complete supply chain for the 1.25Cr-0.5Mo steel has formed in China’s steel industry. It means that this steel is 100% recyclable and full spectrum of starting materials are commercially available. Thus, we can not only supply 1.25Cr-0.5Mo steels in various product forms such as casting, forging, pipe, tube, fitting, valve part, and pressure vessel, but also reduce the cost to the minimum.