Alloy 2507, with UNS number S32750, is a famous super duplex stainless steel. As a member of the duplex stainless steel family, it is a two-phase alloy based on the iron-chromium-nickel system with a mixed structure of about equal proportions of austenite and ferrite. Due to the duplex phase balance, Alloy 2507 exhibits excellent resistance to general corrosion like that of austenitic stainless steels with similar alloying elements. Besides, it possesses higher tensile and yield strengths as well as significantly better chloride SCC resistance than its austenitic counterparts while maintaining better impact toughness than the ferritic counterparts.

For severe environments in which chloride SCC is the primary concern, all austenitic stainless steels, especially types 304 and 316, are susceptible to some degree. Standard duplex stainless steel 2205 (S31803/ S32750) is highly resistant to chloride SCC. Under certain conditions of temperature – Cl– concentration combination, super duplex stainless steel 2507 (S32750) is completely immune to the stress corrosion cracking as illustrated in the diagram above. This has been attributed to the blocking of crack propagation by the ferrite. The SCC resistance may be evaluated by a drop evaporation test in which the critical stress that caused cracking is indicated as a percentage of yield strength. According to lab literature, in the drop evaporation test with sodium chloride solutions at 120°C [248°F], the critical stress that caused stress corrosion cracking of mill-annealed Alloy 2507 (S32750) is about 76% of the yield strength. It is much higher than the value of Type 316 which is only about 5%. 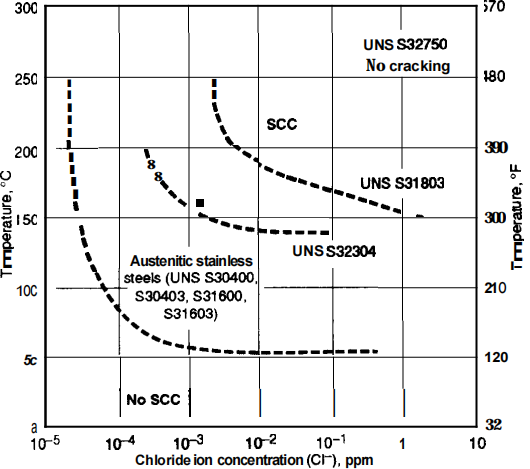 The nominal composition of alloy 2507 (S32750) is 25Cr-7Ni-4Mo-N. Compared to alloy 2205 (S32205), alloy 2507 has higher chromium content, which results in increased corrosion resistance. Since chromium promotes the body-centered cubic structure of iron as a ferrite former, more nickel is necessary to promote the the formation of austenite to balance the effect of higher chromium. Higher chromium also promotes the formation of detrimental intermetallic phases, which are sensitive to 475°C embrittlement because of precipitation of the chromium-rich α’ phase, and to embrittlement by sigma, chi and other phases at higher temperatures. Alloy 2507 (S32750) also has higher nitrogen content, which not only promotes the formation of austenite and increases the strength, but also delays the formation of intermetallic phases enough to permit processing and fabrication of the duplex grade.

*Both ASME/ ASTM and EN grades are listed.

Super duplex stainless steel 2507 shall be heat treated by solution annealing and a subsequent rapid water quenching. They can be used for pulp and paper industry, seawater desalination, oil and gas industry, food and drink, architecture, chemical plant, power plant.