The slip-on plate flange conforming to ASME B16.5 is a special slip on flange without hub. It can be viewed as a blind flange drilled with a bore at the center. The outside diameter, diameter of bore, flange thickness, bolting dimensions, and facing dimensions of a S/O plate flange are the same as that of a standard slip on flange of same size and class. Although ASME B16.5 doesn’t endorse the plate flange, it doesn’t forbid the use of it either. Generally, the flange may be furnished with flat face or raised face available in Class 150 as illustrated below. 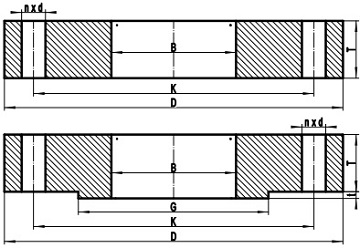 The drawings for ASME B16.5 S/O plate flanges, with flat face or raised face, Class 150.

When attaching to a pipe, the plate flange slips on the pipe till the pipe reaches a certain depth of the bore. Two circumferential fillet welds are applied to join the pipe with the plate flange, one external and one internal. The plate flanges are mainly used in utility services where short tie-ins are necessary or space limitations necessitate its use. The initial cost of a plate flange is even lower than the standard slip on flange of the same size and class.

S/O plate flanges manufactured in accordance with ASME B16.5 are available in Class 150 from NPS 1/2 through NPS 24. The dimensions and weights are listed in below tables. The dimensional tolerances are the same as that of the slip on flange.