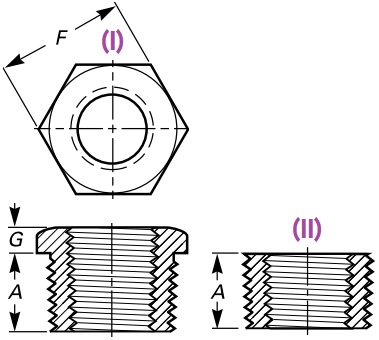 The drawing of two types of ASME B16.11 bushing: (I) hex head bushing; (II) flush bushing.

The ASME B16.11 bushing has male threads on the surface of outside diameter (O.D.) and female threads on the surface of inside diameter (I.D.). When used in piping connection, its O.D. screws into the larger-diameter pipe with female threads and its I.D. screws into the smaller-diameter pipe with male threads, thus, makes a reduction in line size like a reducer. ASME B16.11 bushings can be further classified into hex head bushing and flush bushing, of which hex head bushings are most commonly used. The bushings are available in sizes 1/8″ through 4″. They are not identified by class designation and may be used for pressure ratings up to Class 6000 designation.

*Click to view dimensions and masses of ASME B16.11 fittings.